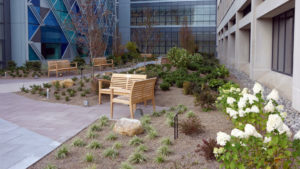 Article by Moira Sheridan for the News Journal

At some point near the end of the construction design process for the expansion of the Nemours/Alfred I. duPont Hospital, planners realized something was amiss.

A long, narrow strip between the old and new buildings would mean patients would look out on a flat, black rooftop spanning the two sections. Creating a more inspiring view, as it happened, was something only a garden could do.

“This needed to be a healing place; it’s not a playground or a place to be super loud. It’s really a meditative garden,” says Kay Holbrook, an associate administrator at Nemours who led the expansion project. “We wanted to keep spirits up and bring nature in.”

To do that, they consulted with families, staff members and architects about the best way to adapt the space. Rodney Robinson Landscape Architects, a Delaware firm with experience designing not only public and private spaces, but also those related to health care and healing, was tapped to take on the challenge.

The recently completed Japanese-style garden marries the space beautifully, allowing a peaceful view and a private getaway for patients, families and staff.

Unusual in that it is a garden within the hospital, located off the pediatric intensive care unit on the second floor, it beckons through every glass door and window. Two entrances allow access for patients and families, as well as hospital staff and visitors. Patients’ rooms on the second floor look directly out, while those on upper floors look down from above.

Some were initially skeptical about the plan, recalls Geoff Anderson, an associate with Rodney Robinson Landscape Architects.

“You’re creating a garden where there’s no soil, no water and very little sun?” he remembers one of the planners asking. Working between two buildings meant adapting to the confined space and low light levels created by both exterior walls, a space made trickier by its second-floor location.

The pathway is a pre-cast, concrete paving system on pedestals, and rocks from the construction process were placed amid the planting beds. An irrigation system, which was extensively tested for soundness, ties into the drainage system.

From the bubbling water feature at one end to the three-piece sculptural ceramic wall at the other runs a serpentine path with alcoves veering off at intervals.

“Because one of the main concerns for the staff was to create privacy, we started using vegetation to create veils between ‘rooms,'” says Anderson.

In order to maintain privacy, yet avoid creating an opaque green wall that would obstruct views, they focused on shrubs that will eventually grow up to manageable heights. The path has a lovely, swooping flow, and even though the plantings are young, it’s easy to imagine abundant greenery before too long. 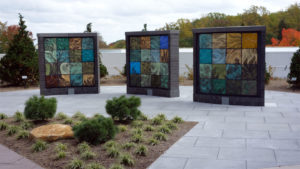 Flowering trees like dogwood, redbud and magnolia will enliven the garden in spring, but color isn’t meant to be the focus. A calmer, green theme prevails, using masses of ferns, hostas and Solomon’s seal as groundcovers for the shady areas.

Evergreen woody plants such as rhododendron, cherry laurel, yew and aucuba will provide winter interest, along with nighttime lighting. Tactile elements appear in the various tree barks, particularly Stewartias with their mottling and paperbark maples with their curling, cinnamon-colored bark. Even the sculpted wall invites visitors to touch its rolling surface.

A millstone fountain makes a soft noise, and the borrowed view of the mansion grounds beyond with their spectacular sunsets promise a healthy start to this unique garden.